Rolling the mouse over an icon will display detailed information, usually including the raw (i.e., encoded) report and a summary of major elements in the report. Note: Be sure to look at the raw details as often there are important details included with the remarks.

Rolling over the map will show information about TFRs, AIRMETs and SIGMETs (if any) at the current mouse location, and clicking on the map will display AIRMET and SIGMET details and disable mouse roll-over.

METARs are displayed as blue-tinted circles, with the standard Aviation Flight Category colors and Cloud Coverage symbols. The Cloud Coverage displayed is based on the greatest coverage, regardless of altitude.

SIGMETs are visible as bordered areas on the map, moving the mouse to within the border will change the border line from grey to red or orange, and details of the SIGMET will be provided.

AIRMETs are visible as bordered areas on the map, moving the mouse to within the border will change the border line from grey to green, yellow or blue, and details of the AIRMET will be provided.

TFRs are visible as bordered areas on the map, moving the mouse to within the border will change the border line from grey to red, and details of the TFR will be provided.

Based on VFR Sectionals, as described in the FAA NACO Aeronautical Chart User's Guide 8th Edition [PDF], AvnWx displays airports based on if there is a control tower (blue versus magenta), if there is fuel (four "ears" around the outside of the circle), size and type of runways. NOTE: Aeronautical charts attempt to show actual runway configurations within the magenta and blue icons. WE DO NOT. For example, AvnWx will always show the same blue icon for all large towered airports, regardless of the number or configuration of runways. This is for convenience, and should not be used for in-flight navigation. If you attempt to use it for actual navigation, please notify your AME about your new mental handicap at your next Medical...

AvnWx displays boundaries for only USA Class Bravo, Charlie and Delta airspaces. The colors used match standard VFR Sectionals, but since dashed lines are a bitch to draw on Google Maps, we use thicker lines for class Bravo and Charlie, thinner lines for class Delta (rather than dashed blue lines) -- It's pretty obvious when you see an example: 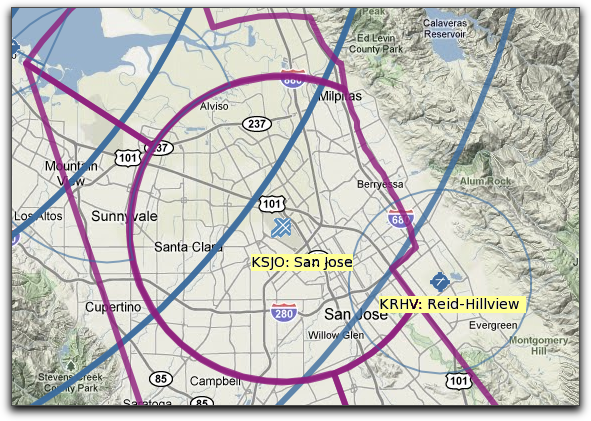 You can easily see KSJO, a Class C airport in the center. Its thick magenta lines show bondaries for different altitudes for this airspace. Southeast of KSJO is a smaller Class D airport, KRHV. You can see the thin blue circle outlining its airspace. Above it all, are three thicker blue lines which are the outlying boundaries for Class B KSFO San Francisco, which is to the northewest and not shown on this picture. (A keen observer will also see Class D surrounding Moffet Field and part of Palo Alto in the upper right corner of this image.) Using the maps Terrain background (as above) you can see how some airspaces conform to landmasses, lakeshores, rivers, etc. Alternatively, switch the map background to Satellite and you'll be able to pick out shopping malls, churches or other landmarks to guide you VFR.

Based on VFR Sectionals, as described in the FAA NACO Aeronautical Chart User's Guide 8th Edition [PDF], AvnWx displays navaids based on type.

NEXRAD colors reflect the intensity (reflectivity) of the echo returns. See discussion at NOAA for details, but as a broad generalization the colors go from blue to green to yellow to red to magenta. Green is generally reported as Trace rainfall, blue would be less. Oranges and red are strong rain, dark reds to magenta are worse.